Today we’re having a chill out day. I’m sitting in my cousin’s house with a cat curled up on my lap, staring out the window at the countryside. It’s a nice day, breezy but the sun is shining and there’s more white cloud than grey in the sky.

We’ve packed a lot into these past couple of days. On Saturday we went for a walk along the cliffs of Courtmacsherry to see a raven’s nest. At first I thought there were six to eight raven chicks in there, but on a second look there were only two. They were huge. The mother raven was sitting a few feet away on a rock, while another was gliding in the air above. For a first raven experience, it was pretty great. After that we stumbled across a faerie hollow and picked some wild garlic for dinner before retiring to drink gin, cuddle squishy rats, and play Cards Against Humanity.

On Sunday we drove into Kerry, passing through West Cork, into the mountains of Killarney national park. We stopped for lunch in Kenmare, and I spent too much on fancy soap and mugs. Lunch was had at a little cafe called Mick and Jimmy’s, where a band were playing, and the staff were very sweet and provided us with lots of great vegan options. After, we made our way to the Gap of Dunloe, and saw another raven being attacked by a much smaller hooded crow, and a kestrel that was standing in the middle of the road and took flight as we approached. 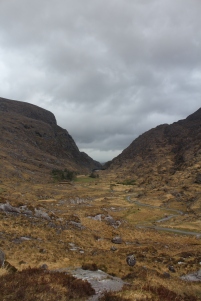 Killarney is crazy pretty. It’s incredibly dramatic, and you can’t not think about how it was created when there are giant boulders bigger than most houses, cracked in half either side of the road after being spewed out by some great volcano. It was the perfect weather for it too, with storm clouds lurking over the mountains. Though thankfully the rain held off until we were on our way home.

Later, we’ll go for a walk to look at baby goats, come back and watch some films. My cousin hasn’t seen What We Do in the Shadows, which is practically a tragedy.